A Place Further Than the Universe (episode)

A flashback shows Shirase three years earlier getting the news about her mother. Kanae announces a 3-week-long expedition to the inland research station, and invites the girls. Shirase has to think about it. She discusses her feelings with Gin Tōdō, while the other high-school girls leave her alone to decide for herself. She counts out the million yen, remembering all the work that it took to get it, and decides to go along. Yumiko holds an Antarctic barbecue. Eat fast, or it will be cold.

The journey begins using a caravan of snowcats. It’s a lot colder at the higher elevation inland. They see a sun pillar. Kimari manages to hammer a nail into a plank using a banana. The girls have a sing-along atop the snowcat.

They arrive at the inland station, where the team intends to build an observatory. The girls search the building for some article left by Takako, something to remember her by, and find her laptop. Everyone weeps as Shirase boots it up and discovers all of the unread e-mail which she has been sending over the years, as she was seen doing throughout all of the previous episodes.

The opening song does not play for this episode. Instead, the opening credits text appears as Shirase tells the story of hearing about her mother.

The ending credits song for this episode is "Mata ne". 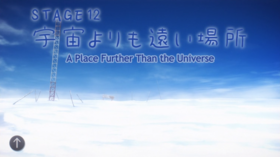 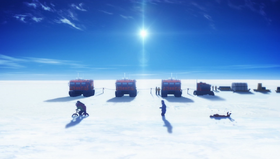 As Shirase and Hinata bike past the snowcat caravan, Kimari does a faceplant 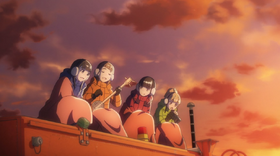 The girls sing atop a snowcat 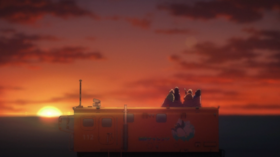 They watch the sun that never sets 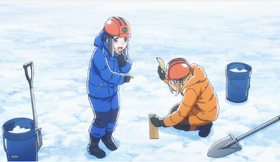 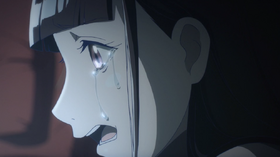 Shirase receives all of her e-mail 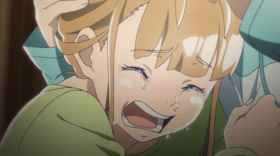 Hinata ends up in tears 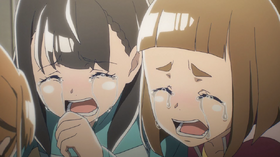 Yuzuki and Kimari end up in tears