Bash That Drum Can! is the eleventh episode of A Place Further Than the Universe.

The girls help Yuzuki run through some dialog for the TV show that she is going to be in. To everyone’s amusement, Kimari gets a sunburn on her face where she wasn’t wearing the facemask. They spend time in the bath together. Shirase shows off the Mahjong skills which she learned from her mother.

The expedition sets up a video conference link with Japan. Kimari's family is among those who are there on the Japan end. Hinata becomes upset when some girls from her old high school appear on the video link to greet her. Later, she explains to the others that these girls are from the track team, and she tells the story of how they ostracized her for being a better runner although only a first-year.

They go on an overnight expedition to a remote site where there’s exposed rock. Shirase broods over how the track team treated Hinata, but Hinata insists on letting the matter drop. At the next day’s video conference with Japan, Shirase confronts the track-team girls, and tells them to piss off. To celebrate the new year, the girls hang an empty drum can to create a makeshift Buddhist temple bell, so they can perform the purification ritual.

The insert song for this episode is "Sora wo Miagete". 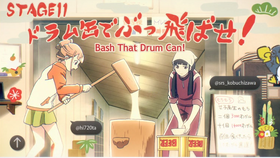 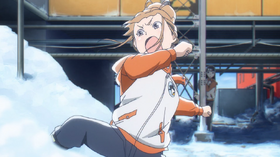 Hinata vents her anger while Shirase looks on from the shadows 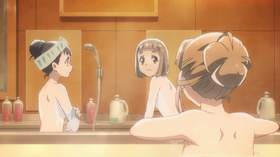 They use the ofuro 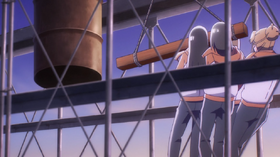 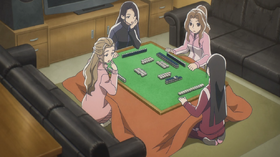 They play mahjong at the Kotatsu