Hinata Miyake (三宅 日向 Miyake Hinata) is one of the main characters in A Place Further Than the Universe.

Hinata is a teenager with long light brown hair that is tied up in a large donut bun, leaving two shoulder length bangs that frame her face. She also has light purple eyes.

She has a rather short stature, and is the shortest of the group. Hinata is first seen wearing a blue and white retail-worker uniform. Her casual wear consists of a green jacket with white sleeves, a yellow Onigiri rice ball/sandwich/ octopus/Weiner/fried shrimp shirt underneath, a red miniskirt, and yellow/green/black sneakers. She also has a green variant skirt and later an orange jacket that she wears with her friends while boarding the boat to Antarctica. She tends to leave her jackets unzipped.

Hinata is one of the more expressive members of the group of girls, usually sporting a cheerful smile, even in serious situations such as losing her passport or being chased. However she commonly enjoys adopting comedic expressions when in the company of her friends.

Hinata is an extremely energetic and friendly person who radiates with positive energy, being one of the more expressive members of the group of girls. She is usually seen sporting a cheerful smile and she is able to stay positive even in serious situations such as losing her passport, or being chased. Even when her old track team talked behind her back and suddenly showed up to apologize, she kept her smile to hide her annoyance from her friends.

In high school she was treated badly by the track team. They encouraged her to do her best, then talked behind her back later when they didn't know she was listening. This has led to a deep distrust of people when they try to be considerate about her, as if she expects to be betrayed again. This also brought about a desire to be alone, and is one of the reasons she left high-school.

"Shirase, I know you were trying to be considerate. I just really hate that kind of thing. I know that’s how relationships work, but when people try to be considerate of me it’s disconcerting, I guess; like I can’t tell how they really feel anymore. That’s why I couldn’t handle high school, and wanted to be alone as much as possible. At the end of the day, when I’m with someone else, things usually end up like this." (Episode 6, with flashbacks to the high school track team)

She commonly enjoys adopting comedic expressions when in the company of her friends. She has four Ganesha statues in her room, a Ganesha plushy and her phone wallpaper is Ganesha.

Despite her comical nature, she usually serves as the sage of the four girls, being surprisingly mature, realistic, and street smart. She is a natural when it comes to creating her own quotes or words of wisdom to encourage or help her friends choose the correct path of action. Although there are times when she can be hopelessly optimistic, as when she loses her passport, she opts to say things will work out "Somehow" stupidly exclaiming "Back at'cha" after being asked by Shirase Kobuchizawa what options they have to get the passport back.

Hinata usually operates the camera when doing reporting duty with her friends. This may have stemmed from a failure to impress Tamiko Shiraishi prior to her daughter Yuzuki joining the group.

Hinata was originally a high-school student, but due to troubles with the track team there, dropped out and took to homeschooling. She was working her job at a convenience store when she initially heard of the plans with Shirase Kobuchizawa and Mari Tamaki to go to Antarctica as they were talking loudly about it. She was able to get on the expedition team after convincing Yuzuki Shiraishi to go.

Hinata's talent as a sprint-runner was hinted as early as episode 2, when she followed Shirase's plan to gatecrash the informal meetup of the Antarctic expeditioners in Shinjuku. When that plan failed and the girls had to run, Hinata ran faster than Shirase and Mari, and suggested they split so that they would be harder to catch. It was later revealed that Hinata had been chosen to run the women's 200m for her school, despite only being a first-year, which led to jealousy from the third-year runners. 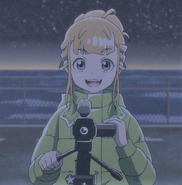 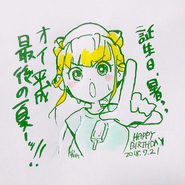 Hinata was sold as Nendoroid #1021