Partial Friendship is the tenth episode of A Place Further Than the Universe.

Upon arrival at Syowa Station research base, the girls are put to work moving gear and doing cleanup. Yuzuki gets an e-mail saying that she has been chosen for a role in a TV show. She isn’t sure if she wants to do it, but accepts when she hears Dai Himi listening to her pop song, realizing that it will make the others happy to see her in the show.

Yuzuki sulks when she finds out that the others became best friends but didn't invite her. They discuss the nature of friendship. The expedition celebrates Christmas.

Yuzuki breaks down in tears when the others come to celebrate her birthday, which passed by unnoticed during the voyage while they were seasick. Later Yuzuki apologizes, “Sorry, ne(ね)?” Kimari comments on this, noting how the word 'ne' (ね) implies friendship.

"Keeping busy is the best way to speed the clock’s hands!" - Hinata Miyake. This is another of her made-up sayings

The insert song for this episode is "Mata ne".

Yuzuki's pop song which Dai Himi is seen listening to is "Forōbakku ga tomaranai", and is performed by her voice actor Saori Hayami. 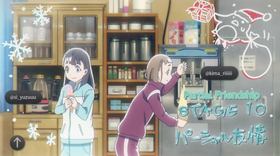 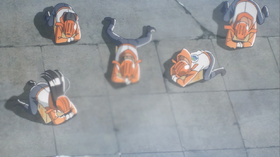 They duck and cover as the helicopter takes off 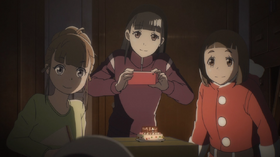