Episode 1
Shirase Kobuchizawa (小淵沢 報瀬 Kobuchizawa Shirase) is one of the main characters in A Place Further Than the Universe.

Shirase is a young woman with pink eyes, a long face, with long beautiful black hair that runs past her shoulders to her back, with the bangs being cut straight, right above her eyes, leaving her left strand longer than the right.

She is rather tall and slim, being the tallest of the group. Shirase is first seen wearing a normal school uniform, and her casual wear tends to include a black miniskirt with stockings that stop at her mid-thighs.

Shirase usually has a blank or serious expression on her face, but given the situation it can easily transform into an expression of anger, glee, shock, sadness, embarrassment or excitement at the drop of a hat.

Throughout the early episodes, she is regularly seen sending e-mails to her mom.

At the end of the series, she decides to have her hair cut neck-length, as it pays homage to her late mother, Takako Kobuchizawa.

Shirase presents herself as cool, aloof, and serious, but this can easily fall apart as she reacts extremely in many situations, showing that she is the most emotional of the group, and giving her a very interesting personality. When she hears that people are spreading rumors about her and the other girls messing with boys in Shinjuku, she gets angry and vows to find the culprit, although never actually does so.

Shirase is rather awkward around people, and her serious demeanor can come off as off-putting, hence why she doesn't have many friends.

She has a borderline lustful obsession with penguins, and breathes heavily when seeing anything related to them, even enduring their pungent smell just to get close to them. Antarctica itself makes her excitement levels reach their peak, causing her to run around and spout things such as "Wait for me Penguins!", only to run into a wall and stub her toe.

She gets easily embarrassed when doing things such as Karaoke, but can lash out in a healthy scream full of rage while her friends pressure her to sing. She is also very camera shy and always loses her cool when doing news reports during the expedition, turning red and stuttering a great deal, she can also be seen in episode 11 quickly ducking out of view when a camera showing Hinata's old friends is about to turn on. Even though she is camera shy, she is still determined to perform well as she continues to do it to become "A funny, witty camera girl"

Shirase is somewhat bold as she plans to join the Antarctica expedition by using Hinata or Mari's high school girl bodies in order to lure out a male expeditioner, and convince him to let them join. Although it turns out she is unwilling to seduce them, and this plan backfires because all three of them are too shy to pull it off.

It is noted by herself that she gets easily annoyed and frustrated when a plan of hers doesn't work, such as when her mother's friend Kanae initially refused her request to join the expedition, but despite this, she remains eerily optimistic, bitterly repeating that if she had more money Kanae would have allowed her to go. Considering that she has tried joining the expedition more than once lets us know that she is also extremely persistent.

Shirase can be seen as a go-getter being extremely passionate about her goal to reach Antarctica, and actively pursues it, taking many odd jobs to raise one million yen, showing that she is a hard worker. Shirase possesses an incredibly strong will, despite most of the people she knows ridiculing her, and saying that her goal is impossible, she ignores them and uses that as fuel and continues to strive for her goal. She doesn't have many friends, and is regarded as a weirdo by her peers, but she is very trustworthy and holds a deep love and bond for the other three main girls of the series, becoming best friends. She also deeply appreciates the members of the Antarctica expedition crew.

Her trustworthiness and care for her friends is further exemplified when Hinata sees her old track teammates on TV, but is distraught as they don't actually care for her, as they spread bad rumors about her during her time on the team, and suddenly appear out of the blue to apologize. Shirase notices that Hinata is upset, despite the smile she always puts on, and is bold enough to tearfully tell her old friends to "Piss off!" while on TV for making Hinata suffer, all despite her initial fear of cameras.

Shirase dearly loves her mother Takako more than she loves penguins, as the reason she endures the ridiculing from people and continuously works hard is to step in her mother's shoes and find out why she decided to go there. When she was a child, and her mother never came back, she sent her thousands of emails, none of which her mother saw or replied to, but Shirase continued to send them, hoping that her mother came back to her. At the end of the series, she cuts her hair short to look just like her mother, further defining her love for her.

Despite her lack of social skills and her camera-shyness, Shirase has picked up several skills from her mother Takako, such as Mahjong and being able to hit with a baseball bat. From caretaker Gin she was also taught how to skip rope, and her knowledge of Antarctica. Shirase rides a bike to and from school, but is unclear from where she learned how.

Based on her count in episode 12, Shirase has worked at least four store jobs, three cleaning jobs, two transporting jobs, two factory jobs, a traffic survey role, a paper round and a delivery by bike in order to earn her million yen. 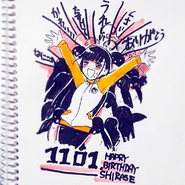