Not to be confused with the insert song, The Follow Backs Don't Stop (Forōbakku ga tomaranai)...

Four Caterpillars
The Follow Backs Don't Stop! is the third episode of A Place Further Than the Universe.

The girls meet at Shirase's place to discuss their next plan to join the Antarctic expedition. They discover that a high-school girl is going along to post web reports and videos of the trip. Just then that girl, Yuzuki Shiraishi, arrives at their door. She doesn't want to go, and asks for Shirase to do it instead. Yuzuki's manager Tamiko Shiraishi, who is also her mother, declines to accommodate the switch.

Yuzuki later tells her mother that she won't go. Shirase is given an opportunity to join if she can convince Yuzuki to go. The girls speak with Yuzuki at the cafe where she studies in the evening. That night, Yuzuki has a strange dream of the girls inviting her to run away with them.

Yuzuki breaks down in tears when the girls arrive at her apartment in the morning to join her on a trip to Tokyo. They visit the Polar Science Museum . They have such a good time together that Yuzuki agrees to go to Antarctica if the other three girls can come along, and so the high-school girls are signed on to the expedition.

"It’s a thin line between self-assertion and selfishness." - Hinata, commenting on the self-centeredness of Shirase's motivations. This is another of her made-up sayings.

Yuzuki's pop song which the girls find online is "Forōbakku ga tomaranai", and is performed by her voice actor Saori Hayami. 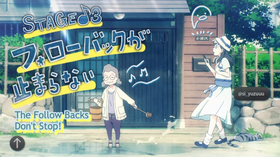 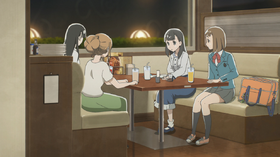 Yuzuki studies at a cafe