Welcome to the Durian Show is the sixth episode of A Place Further Than the Universe.

The girls fly to Singapore as the first leg of their trip to Fremantle, Australia. While they are sightseeing, Hinata becomes increasingly agitated. Hinata reveals that she has misplaced her passport. It’s Saturday, and they will have to wait until Monday to get a new one from the embassy. Hinata tells them to fly on ahead without her, which results in an argument with Shirase who insists that they will be sticking together.

They go to the airport to switch their Monday flight until later, and Shirase has to spend the million yen to cover the cost. Then Hinata’s passport is discovered in Shirase’s handbag. When they first arrived in Singapore, Hinata had to tie her shoe, and handed the passport to Shirase. They switch back to the Monday flight, getting the money back. As punishment, Hinata and Shirase have to eat a durian, the king of fruit. 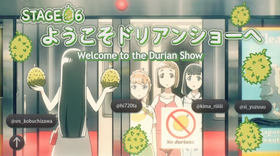 Hinata and Shirase's disagreement distances them from each other 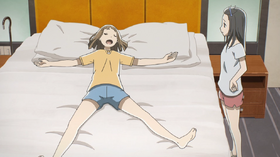