Yuzuki Shiraishi (白石 結月, Shiraishi Yuzuki) is one of the main characters in A Place Further Than the Universe.

Yuzuki is an adorable young girl with grayish-black shoulder length hair, sliver-blue eyes, and a cute face. She is the second shortest member of the group of girls being slightly taller than Hinata Miyake. She has a delicate, petite frame, being the youngest of the group.

Yuzuki usually appears in elegant, fashionable attire, usually consisting of a variety of beautiful dresses, befitting her role as a child actress . She is first seen in a long baby blue dress with a white collar and a sky blue bow ribbon tied into a bow around the waist. She also wears slightly baggy socks, and dark blue shoes.

Yuzuki is also quite expressive just like the other girls, but to a much lesser degree, appearing to be quite disappointed, bored or passive most of the time. Although when she is happy she has a wonderful smile, that is full of joy.

Yuzuki is a polite and quiet young girl who is somewhat cold and blunt, usually being the straight man when dealing with the antics of the other main girls. Like the other girls, she is very expressive, but to a much lesser degree. Despite being the youngest, she is often the most mature of the group, and is used to traveling and entering new places, due to her position as a child actress, becoming somewhat cynical and bored with her job. She is a bit rebellious towards her mother, who is also her manager, trying to control her life and everything she does, insisting that Yuzuki go to Antarctica against her will. Her mother is the reason she has no friends, so she tries to avoid her when around the other girls. She tends to say the phrase "I could just die now" to emphasize her discomfort when put in certain situations, like the other girls realizing she is a celebrity.

Yuzuki desires to make friends, as she has never had any due to her busy schedule, or people only becoming involved with her due to her celebrity status, causing her to become ignorant when it comes to the meaning of friendship. The prospect of making new friends greatly excites her. When the other girls show their dedication to have her on the journey, she is moved to tears as they truly wanted to be friends with her. Although she thinks that there has to be some sort of written or said confirmation when people become best friends, the girls eventually explain to her why such contracts are not needed.

It makes her upset when the other girls were aware that they were best friends, but she had no idea, slowly shirking away and going as far as walking into the cold of Antarctica without a coat, much to her regret.

She may come off as distant or cold, but is a professional when it comes to acting on camera. Similar to Hinata Miyake, Yuzuki puts on a beautiful smile to appeal to her audience and delivers lines with a radiant charm while reporting their activities during the expedition.

During the journey with the other girls, Yuzuki opens up and smiles genuinely more often, growing to see the other girls as true friends and becoming fond of their presence.

Yuzuki is also scared of heights. This is hinted at in the opening sequence.

Yuzuki comes from Hokkaido. She is younger than the other main characters, being only a first year. She has been a child actress since the age of 4 and her career is managed by her mother. As such, Yuzuki doesn't have friends, because schedules would always keep her busy.

It is implied in episode 6 that Yuzuki has been to Singapore before.

Yuzuki first appears with her mother at the informal Antarctic Challenge Foundation meetup at a kabukicho in Shinjuku, where she notices the commotion involving Kimari, Shirase and Hinata. She manages to escape from her mother and get on board the same train as the other three girls, back to their home. It is not until the next day (episode 3) that Yuzuki visits Shirase at the latter's home along with Kimari and Hinata. Yuzuki introduces herself, wanting to give away her reporting duty in Antarctica. However, it is not long before her mother catches her and takes her away.

Kimari, Shirase and Hinata later track down the local hotel that Yuzuki was staying at, and see her walking out of it. Yuzuki takes the three girls to the café where she studies, and is asked about why she doesn't want to go. Yuzuki gives an honest explanation, and sees off the trio at the hotel lobby, thanking them for the conversation. That night, Yuzuki dreams that Kimari, Shirase and Hinata were asking her out, by climbing on a ladder to her hotel room window while it was windy outside. When she wakes up, she is greeted by the three girls themselves at the door to her hotel room. They invite her to the Polar Science Museum in Tachikawa. She is moved to tears by the offer, and phones her mother to tell her that she is willing to go to Antarctica, but only with the three girls that just befriended her.

In episode 10, Yuzuki receives an email from her mother which informs her that she won the role of the protagonist's friend in a drama series that she auditioned for before she left for Antarctica. She starts to doubt whether she had been friends with the other three girls. After a member of the crew plays her idol song, she decides to accept her new role, before handing out a paper for Kimari, Shirase and Hinata to sign. While the latter two simply refuse, Kimari cries and hugs Yuzuki. During the Christmas dinner, Kimari refuses to talk to Yuzuki after it. Shirase and Hinata tell Yuzuki that friendships aren't as easy to describe as parental or spouse relationships; that friendships are easier to form and split because of their vagueness. After the Christmas afterparty, Kimari visits Yuzuki and shows her, through a history of phone messages, that she still values her friend from home, Megumi, even after the latter tried to break it off when she was leaving. Yuzuki smiles when Kimari too thinks her own friendship with Megumi is vague. Just then, Shirase and Hinata gatecrash the room and present their own self-made cake with a candle on it, to celebrate Yuzuki's 16th birthday which had passed when they were seasick on the way to Antarctica. This moves Yuzuki to even more tears than before. 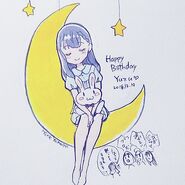